Michael wrote this when he was in the 10th grade. He was enrolled in the hospital homebound program and was given an assignment to write an essay on fear. I nagged him, his tutor nagged him and he kept refusing to write the blasted paper. Finally, I demanded that he write the paper because it was for a grade and I was not going to be embarrassed by his defiant behavior. After several minutes of a war against the wills (and there were plenty of those in our lives together) he declared he was not going to write the paper because he was philosophically opposed to the notion of fear and had made a conscious decision not to be afraid. I reminded him that a child of 15 years didn’t have the luxury of embracing philosophical notions as the basis for nonconformance when it applied to school assignments. With that he slammed the door and went into his room. I felt a degree of satisfaction in knowing that I had made my point.
About an hour later Michael emerged from his room. With evident defiance he firmly placed the paper on my desk and said… “There’s my assignment. That’s it, I’m not doing it over or changing anything about it.” I smiled and thanked him before I had even glanced at the title which at first glance made it apparent that he had won this battle and from that point on never again did I ever try to make Michael do anything he felt philosophically opposed to doing. This paper would be the mantra that described the essence of my son. After reading this essay, I went into his room. I confessed my mistake and told him how thankful I was for his perseverance and tenacity in teaching me a great lesson in life. More than anything this reminded me of the importance of appreciating parent child relationships as a union of souls that was never intended to be one-sided. 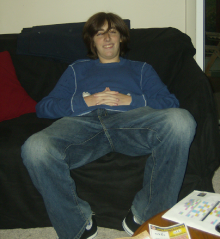 I am a mortal human being. I have no special powers to live forever.  From the moment we take our first breath cells begin to die.  I have a rare disorder called Barth syndrome. I refuse to let the term life-threatening define me. Life itself  is life-threatening.

The greatest of all fears is the fear of death. The irony is death happens to everyone. Life will always come to an end. People often fret over how they will die or what malady will happen to them. Sometimes things happen to us that are out of our control. We can fear these things or we can be courageous about them.

Some people are afraid of snakes even though they have never encountered a snake. Some are afraid of bugs or other silly things like that. When I was old enough to realize death—the worst thing that could happen to anyone is going to happen to everyone—I chose not to waste my life by living in fear but moreover to be fearless. Fear paralyzes where courage sets us free.

I will not waste my time living in fear. I will live my life to the fullest. I will not consider what will come of me because I am not any different than any other mortal human being. I will come and I will go, that much has been defined for me. I have been fortunate enough to draw a first breath that defined the start of my life and I know my last breath will define the end my life. I choose to make the breaths between my first and last the living years.  It is not my choice about when the first and last breath occur but it is up to me to define how I live my life with every breath between. Therefore I refuse to allow fear to define how I live my life.