Congrats to Tyler on finishing Chemotherapy!

Check out his End of Chemo Bio, written by our own Emily Sullivan, below: 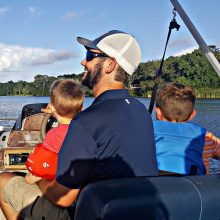 “If you start something, you might as well finish it.”

“I have always been that way,” says Tyler. After three years of chemotherapy, Tyler is finishing his treatment plan and celebrating the end of a significant chapter in his life.

Tyler faces challenges with the mindset that if you can keep working hard and enduring moment by moment, anything is possible.   Whether it be overcoming T-Cell Acute Lymphoblastic Leukemia for three years, or working to pull a four-wheeler out of the mud over the course of eight hours, Tyler demonstrates that he can do anything with the right amount of determination and strength.

Tyler believes that his hardworking values began from a young age, when his father coached his baseball team. During those crucial years, Tyler learned the importance of consistent practice, teamwork, and living with integrity.  Tyler built his character over time, culminating in to the start of his senior year, when he received his most challenging season to date.

The beginning of senior year at Rutherford High School promised to be Tyler’s best—he had his friends whom he had known since elementary school by his side, and courses were tolerable when he could typically look forward to a bonfire on the weekends. One weekend, Tyler visited a friend to help him do some mechanical work on his truck.  Leaving his friend’s house, he felt an increasing back pain unlike anything he had felt before.  He sought medical attention, but the prescribed muscle relaxers could not touch the pain.  After receiving follow-up bloodwork, the physician called Tyler to go straight to the hospital where a bed awaited him.  A bone marrow biopsy revealed that Tyler’s back pain emanated from cancer.

Reflecting on the period where Tyler received his diagnosis, he says that it moved very fast. Immediately his family had to make decisions on where to pursue treatment.  Tyler says, “I didn’t really care, I was in so much pain.”  Tyler’s cancer wreaked havoc on his vertebrae, leaving him in a constant state of agony.  When he arrived at Shands soon after learning he had cancer, Tyler’s mentality focused on doing whatever it took to rid his body of the pain.

Tyler says that he never thinks about questions like, “Why me?” as before Tyler was diagnosed, he watched both his sister and mother endure cancer just years before. He remembers thinking that based on his family history, cancer may be something that he would have to deal with one day.  Still, Tyler could not fathom how cancer would change his life, especially in the beginning.

Initially, Tyler spent continuous weeks inpatient. News spread quickly in his Panama City community, so while Tyler stayed at Shands, his friends and family mobilized to organize school fundraisers.  Many people reached out to Tyler to offer support and prayer.  Tyler expressed his gratitude for all of the care and compassion, but with all of the virtual love it was still difficult knowing how much he was missing out while spending his senior year in the hospital.  Chemo drained him, but he still felt determined to continue his coursework online so that he could graduate with his class.  When he was not studying, he listened to music.   Although anyone who knows Tyler can attest to his natural sociable personality, Tyler says that the time he spent in the hospital was more of an introspective time for him.  Keeping the goal of graduation at the forefront, Tyler’s medical team worked with him to allow him discharge from the hospital, right in time to attend graduation.  With incredibly low white blood cell counts, Tyler lacked the ability to walk across stage, thus his best friend, Joey, decided to step in.  When the announcer read the name, “Tyler Reid,” Joey walked Tyler in his wheelchair across the football field, then assisted Tyler as he walked on stage amidst a crowd of cheering supporters.  This moment epitomizes Tyler’s will to succeed, as well as the strong friendships Tyler cultivates.

Tyler would continue maintenance chemotherapy in an outpatient capacity, driving four hours to Gainesville each month for chemo and appointments.   During this time, Tyler dedicated himself to starting his own landscaping business, Reid’s Landscaping, inspired by experience doing summer jobs in high school.  Tyler also began working as a Property Appraiser for Bay County Property Appraising, where he has worked for the last year.  Another highlight of Tyler’s treatment time includes performing with his guitar alongside musician Adam Hood, at a benefit concert.  Tyler is a natural leader, gifted musician, entrepreneur, and businessperson.  Tyler courageously takes on new opportunities to learn and grow, pushing himself to make the most of each moment given.

Evaluating his perspective on life after the last three years of enduring cancer, Tyler says that he “does not sweat the little things” anymore. He chooses to invest himself in his relationships, valuing the importance of quality time spent with friends and family.   When it comes to trying new things, he says that he learned “you are never guaranteed tomorrow, so why not!”

Looking ahead, Tyler is planning a Make-a-Wish trip to see the Country Music Awards in Las Vegas this spring. He plans to do a little gambling while he is there too, but the practical side of him says he will limit how much he spends.  Among Tyler’s other goals are using his four wheeler as much as possible, going skydiving, learning to scuba dive, travelling out of the state to go duck hunting, and spending lots of time with his family, friends, and dog, Goose.

Tyler wants to thank many people for helping him accomplish treatment, specifically Dr. Slayton and the Oncology team, the Pulmonology team, the Nephrology team, Mariah and his inpatient nurses, all of the nurses in the outpatient clinic who saw him each month, and Ozzie Hunter. Tyler also expresses much gratitude for the support from his family, including his uncles Bucky, Shane, and Russell, his sister, Melissa, and her sons Reid and Rhett, and most especially, his parents, Darrell and Natalie.

Below is an encouragement from Tyler’s mom, Natalie, on behalf of his family:

“You made it!!! 3 years and 3 months have gone by, and you have truly been an inspiration to all of us by showing so much strength, determination, and fight. You’ve fought a might battle, but, with God on your side, you’ve won! We are so proud of all that you’ve accomplished over the past 3 years and 3 months – from graduating high school to owning your own business to working a full-time job – your drive and motivation, even while going through this awful treatment, have been incredible. We are so thankful for you, Ty. We love you more than you will ever know!”